Recent studies demonstrate the use of a two-stage supervised framework to generate images that depict human perception to visual stimuli from EEG, referring to EEG-visual reconstruction. They are, however, unable to reproduce the exact visual stimulus, since it is the human-specified annotation of images, not their data, that determines what the synthesized images are. Moreover, synthesized images often suffer from noisy EEG encodings and unstable training of generative models, making them hard to recognize. Instead, we present a single-stage EEG-visual retrieval paradigm where data of two modalities are correlated, as opposed to their annotations, allowing us to recover the exact visual stimulus for an EEG clip. We maximize the mutual information between the EEG encoding and associated visual stimulus through optimization of a contrastive self-supervised objective, leading to two additional benefits. One, it enables EEG encodings to handle visual classes beyond seen ones during training, since learning is not directed at class annotations. In addition, the model is no longer required to generate every detail of the visual stimulus, but rather focuses on cross-modal alignment and retrieves images at the instance level, ensuring distinguishable model output. Empirical studies are conducted on the largest single-subject EEG dataset that measures brain activities evoked by image stimuli. We demonstrate the proposed approach completes an instance-level EEG-visual retrieval task which existing methods cannot. We also examine the implications of a range of EEG and visual encoder structures. Furthermore, for a mostly studied semantic-level EEG-visual classification task, despite not using class annotations, the proposed method outperforms state-of-the-art supervised EEG-visual reconstruction approaches, particularly on the capability of open class recognition.

SNS providers are known to carry out the recompression and resizing of uploaded videos/images, but most conventional methods for detecting tampered videos/images are not robust enough against such operations. In addition, videos are temporally operated such as the insertion of new frames and the permutation of frames, of which operations are difficult to be detected by using conventional methods. Accordingly, in this paper, we propose a novel method with a robust hashing algorithm for detecting temporally operated videos even when applying resizing and compression to the videos.

Network Slicing (NS) is crucial for efficiently enabling divergent network applications in next generation networks. Nonetheless, the complex Quality of Service (QoS) requirements and diverse heterogeneity in network services entails high computational time for Network Slice Provisioning (NSP) optimization. The legacy optimization methods are challenging to meet the low latency and high reliability of network applications. To this end, we model the real-time NSP as an Online Network Slice Provisioning (ONSP) problem. Specifically, we formulate the ONSP problem as an online Multi-Objective Integer Programming Optimization (MOIPO) problem. Then, we approximate the solution of the MOIPO problem by applying the Proximal Policy Optimization (PPO) method to the traffic demand prediction. Our simulation results show the effectiveness of the proposed method compared to the state-of-the-art MOIPO solvers with a lower SLA violation rate and network operation cost.

Image captioning models are usually trained according to human annotated ground-truth captions, which could generate accurate but generic captions. In this paper, we focus on generating the distinctive captions that can distinguish the target image from other similar images. To evaluate the distinctiveness of captions, we introduce a series of metrics that use large-scale vision-language pre-training model CLIP to quantify the distinctiveness. To further improve the distinctiveness of captioning models, we propose a simple and effective training strategy which trains the model by comparing target image with similar image group and optimizing the group embedding gap. Extensive experiments are conducted on various baseline models to demonstrate the wide applicability of our strategy and the consistency of metric results with human evaluation. By comparing the performance of our best model with existing state-of-the-art models, we claim that our model achieves new state-of-the-art towards distinctiveness objective. 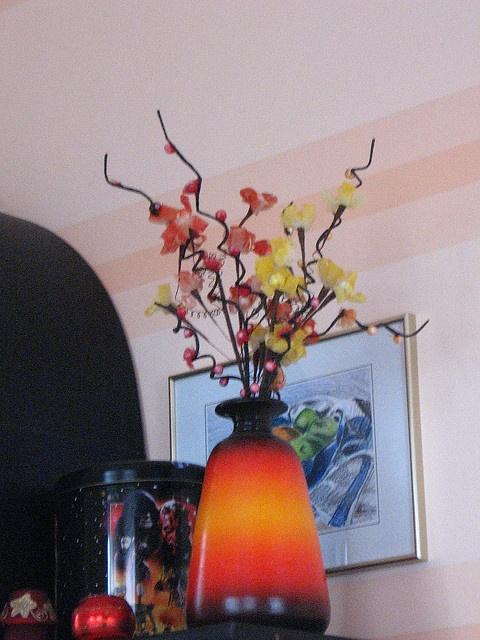 Instance segmentation on 3D point clouds has been attracting increasing attention due to its wide applications, especially in scene understanding areas. However, most existing methods require training data to be fully annotated. Manually preparing ground-truth labels at point-level is very cumbersome and labor-intensive. To address this issue, we propose a novel weakly supervised method RWSeg that only requires labeling one object with one point. With these sparse weak labels, we introduce a unified framework with two branches to propagate semantic and instance information respectively to unknown regions, using self-attention and random walk. Furthermore, we propose a Cross-graph Competing Random Walks (CGCRW) algorithm which encourages competition among different instance graphs to resolve ambiguities in closely placed objects and improve the performance on instance assignment. RWSeg can generate qualitative instance-level pseudo labels. Experimental results on ScanNet-v2 and S3DIS datasets show that our approach achieves comparable performance with fully-supervised methods and outperforms previous weakly-supervised methods by large margins. This is the first work that bridges the gap between weak and full supervision in the area.

With deep learning (DL) outperforming conventional methods for different tasks, much effort has been devoted to utilizing DL in various domains. Researchers and developers in the traffic domain have also designed and improved DL models for forecasting tasks such as estimation of traffic speed and time of arrival. However, there exist many challenges in analyzing DL models due to the black-box property of DL models and complexity of traffic data (i.e., spatio-temporal dependencies). Collaborating with domain experts, we design a visual analytics system, AttnAnalyzer, that enables users to explore how DL models make predictions by allowing effective spatio-temporal dependency analysis. The system incorporates dynamic time warping (DTW) and Granger causality tests for computational spatio-temporal dependency analysis while providing map, table, line chart, and pixel views to assist user to perform dependency and model behavior analysis. For the evaluation, we present three case studies showing how AttnAnalyzer can effectively explore model behaviors and improve model performance in two different road networks. We also provide domain expert feedback.

As the scale of problems and data used for experimental design, signal processing and data assimilation grows, the oft-occuring least squares subproblems are correspondingly growing in size. As the scale of these least squares problems creates prohibitive memory movement costs for the usual incremental QR and Krylov-based algorithms, randomized least squares problems are garnering more attention. However, these randomized least squares solvers are difficult to integrate application algorithms as their uncertainty limits practical tracking of algorithmic progress and reliable stopping. Accordingly, in this work, we develop theoretically-rigorous, practical tools for quantifying the uncertainty of an important class of iterative randomized least squares algorithms, which we then use to track algorithmic progress and create a stopping condition. We demonstrate the effectiveness of our algorithm by solving a 0.78 TB least squares subproblem from the inner loop of incremental 4D-Var using only 195 MB of memory.

Our aim is to develop a better understanding of how the Point of Release (PoR) of a ball affects the perception of animated throwing motions. We present the results of a perceptual study where participants viewed animations of a virtual human throwing a ball, in which the point of release was modified to be early or late. We found that errors in overarm throws with a late PoR are detected more easily than an early PoR, while the opposite is true for underarm throws. The viewpoint and the distance the ball travels also have an effect on perceived realism. The results of this research can help improve the plausibility of throwing animations in interactive applications such as games or VR.

Personalised interactive systems such as recommender systems require selecting relevant items dependent on context. Production systems need to identify the items rapidly from very large catalogues which can be efficiently solved using maximum inner product search technology. Offline optimisation of maximum inner product search can be achieved by a relaxation of the discrete problem resulting in policy learning or reinforce style learning algorithms. Unfortunately this relaxation step requires computing a sum over the entire catalogue making the complexity of the evaluation of the gradient (and hence each stochastic gradient descent iterations) linear in the catalogue size. This calculation is untenable in many real world examples such as large catalogue recommender systems severely limiting the usefulness of this method in practice. In this paper we show how it is possible to produce an excellent approximation of these policy learning algorithms that scale logarithmically with the catalogue size. Our contribution is based upon combining three novel ideas: a new Monte Carlo estimate of the gradient of a policy, the self normalised importance sampling estimator and the use of fast maximum inner product search at training time. Extensive experiments show our algorithm is an order of magnitude faster than naive approaches yet produces equally good policies. 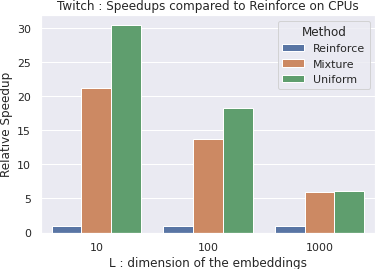 Embedding ethics modules within computer science courses has become a popular response to the growing recognition that CS programs need to better equip their students to navigate the ethical dimensions of computing technologies like AI, machine learning, and big data analytics. However, the popularity of this approach has outpaced the evidence of its positive outcomes. To help close that gap, this empirical study reports positive results from Northeastern's program that embeds values analysis modules into CS courses. The resulting data suggest that such modules have a positive effect on students' moral attitudes and that students leave the modules believing they are more prepared to navigate the ethical dimensions they'll likely face in their eventual careers. Importantly, these gains were accomplished at an institution without a philosophy doctoral program, suggesting this strategy can be effectively employed by a wider range of institutions than many have thought. 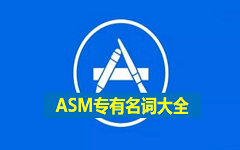